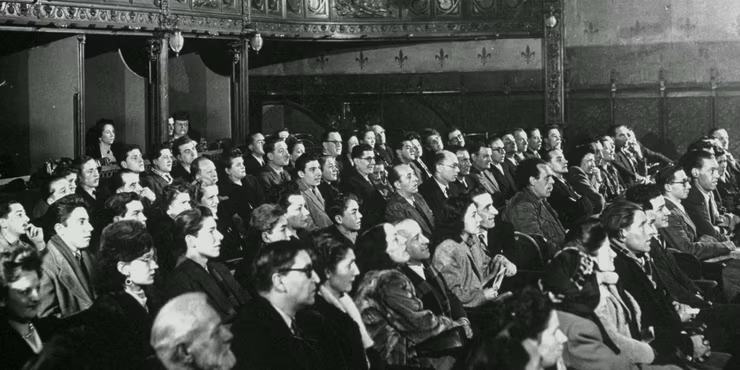 “It’s been reported that once inside the theater, a number of moviegoers vomited at the very graphic goings-on on the screen. Others fainted, or left the theater, nauseous and trembling, before the film was half over. Several people had heart attacks, a guard told me…” – Judy Klemesrud, “They Wait Hours to Be Shocked”, NYT, Jan. 27, 1974

We’ve always been unduly fascinated with horror so visceral that it invokes a physical response. Fainting, swooning, vomiting, and other semi-apocryphal tales dot the historical landscape of certain horror giants. The above quote regarding a particular viewing of The Exorcist embodies this phenomenon, if not defines it in the mind of fans when we discuss such instinctual physical reactions to horror media.

Despite The Exorcist being the quintessential icon of this trope in modern days though, it was hardly its progenitor. No, that honor goes to a strange little theater in the Pigalle district of Paris, France at the turn of the century in 1897.

Le Théâtre du Grand-Guignol (The Theater of the Great Puppet)–no one contemporary to the founding of the smallest theatrical venue in Paris could have possibly guessed the lasting impact of the place upon its opening. The tiniest theater in the disreputable stage district would eventually become so associated with horror, particularly the splatterpunk genre, that it would become a generic term for all bloodsoaked visual performance art. What initially was viewed as an obstacle–the architecture of the chapel which the building housed prior–only became a boon, with the theatergoers getting a sacreligious kick out of the confessional booths becoming viewing boxes for the irreverent plays. To top off the aesthetic, the theater was named for Guignol, a puppet character made famous in the region of Lyon for combining slapstick comedy with incisive political commentary.

Founder Oscar Méténier founded the theater with the intent to focus on plays about characters eschewed by polite society: criminals, sex workers, beggers, and others of the oppressed class. He had, for a time, followed his father’s footsteps in policing, but had a deep desire to devote himself to the arts. He viewed the Grand Guignol as a place where naturalistic performance could be encouraged (as opposed to the romanticism popular at the time). Méténier wrote and directed dozens of plays himself, with his most famous being La Puissance des Ténèbres–a translated modification of Leo Tolstory’s five-act play, The Power of Darkness. However, this adaptation was never performed at the Grand Guignol (from what I could find), despite the main characters being criminals or unfortunate people, fitting the theme of many other Guignol plays.

Méténier used his time as a police officer to inspire many of the brutal crime-fueled plays. Patrons of the Grand Guignol could expect to see five to six short plays for the evening, often horror plays alternated with bawdy comedies (a practice called “hot and cold showers”). The horror plays were bloody affairs, usually relying on natural explanations for the horror–crime, insanity, or panic–rather than the supernatural or paranormal often seen in the more romantic gothic plays elsewhere.

The main mastermind behind the plays was librarian, novelist, and playwright André de Latour, comte de Lorde. His fascination for the study of horror was infamous, with his friends dubbing him Prince de la Terreur (prince of terror) in the 1920s. He collaborated often with the famed psychologist Alfred Binet, co-creator of the IQ testing process, particularly on plays or other works which involved themes of criminal insanity and panic disorders.

Even the famed author Gaston Leroux, who penned Phantom of the Opera, wrote plays for the theater. Perhaps, his concept for the opera ghost haunting the dark patron boxes came from the architecture of the Grand Guignol?

While Méténier billed his plays as naturalistic, this label would seem odd to us today looking at the heightened melodramatics of the plays. As such, the term guignol as a disambiguation would come to be associated with films and plays which embodied the spirit of camp (i.e. deliberately exaggerated and theatrical behavior or style). The term Grande Dame Guignol in particular became a byword for horror productions who made use of the skills of aging actresses who might otherwise be overlooked by major productions–an excellent example of this would be the psychological drama What Ever Happened to Baby Jane?, starring Bette Davis and Joan Crawford as aging sister actresses.

One Grand Guignol grand dame who embodied this more than any other was Paula Maxa, one of the Grand Guignol’s best-known performers overall.  Known as “the most assassinated woman in the world”, Maxa played the victim frequently in the literal sense. Her characters were murdered more than 10,000 times in at least 60 different ways and suffered sexual assault at least 3,000 times. She would have a few more empowered roles as she grew older, but her legacy as a doomed progenitor of the scream queen was sealed with such a resume.

Beyond that, the Grand Guignol gave rise to the popular image of the mad scientist. Despite André de Lorde having decent working relationships with some doctors, it was clear he had some of the same contemporary suspicions as others of medical institutions and many who worked within them. Many of his plays categorized medical researchers as mad men, held only in esteem due to the social contract and the hope that their deranged research might bring some useful fruit. It never did. The plays of de Lorde influenced the trope so heavily in popular culture that it can likely be pointed to as the reason Victor Frankenstein changed so drastically from the novel in other portrayals on stage and in film–which in turn influenced the trope from there on.

Of course, the Grand Guignol influenced horror as an entire genre as well. Until that point, horror was viewed as solely escapism: stories of fantasy with ghosts, witches, and fictional creatures which were (usually) defeated by the end of the tale. In contrast, the stories of de Lorde and his cohorts frightened audiences with tales that were exaggerated, yes, but still within the realm of possibility. While the psychological did often devolve to mindless violence in the theater, it still frightened audiences with the reality of possibility. The Grand Guignol audience became known to be as rowdy as the goings on on-stage, with guests fainting, heaving, or screaming and fleeing from their seats.

To quote Jason Colavito in his text Knowing Fear: Science, Knowledge and the Development of the Horror Genre: “Horror became a vehicle for ideas and philosophy where deep insights gave way to spectacle, and spectacle to violence and gore, until in the end little was left but the gore.”

An English version of the Grand Guignol opened in London in 1908 and again in the 1920s, under the direction of Jose Levy. It featured stellar talents on stage, including performances by Sybil Thorndike and Noël Coward. Several of these plays were filmed and still exist at the BFI National Archive. The Grand Guignol has had massive influences on British horror, particularly as the play morphed into the film as production studios such as Hammer Films opened their doors.

There was also the technical engineering aspect of the theater which made it so unique. Actor and effects artist Paul Ratineau pioneered countless illusions still built off of in horror productions: fake blood that congealed under stage light, realistic false eyeballs, and makeup which melted like an acid burn. Why, the man even invented a method of artificially flaying another actor alive live on stage! It’s no wonder that it’s difficult to believe all of the tales of faintings are apocryphal–after all, the sound of artificial skin ripping and tearing as it was shredded from the body surely elicited an audience reaction.

This, combined with the gimmick of advertising an on-site doctor to help those of weak constitution who passed out at the sight of such violence, sold countless tickets to the box office.

Despite its resonant influence on culture, the horrors of the Grand Guignol would soon pale. The site that was once as popular a destination for tourists to the City of Lights as the Eiffel Tower would have a dramatic fall off of patronage. It was not due to lack of creativity on behalf of the directors, though, nor could it wholly be blamed on the rise of films alone. Rather it was the horrifying creativity of real world forces, as World War I ripped across Europe, bringing with it untold horrors that had never been witnessed or imagined before. It only struggled more after World War II; no one could laugh at horror after the revelations of what happened at the German labor camps.

As recorded by Time Magazine in 1962:  “We could never equal Buchenwald,” said [the theater’s] final director, Charles Nonon. “Before the war, everyone felt that what was happening onstage was impossible. Now we know that these things, and [so much] worse, are possible in reality.”

The Grand Guignol shuttered its doors that year.

Beyond all that, anytime a film advertises with the lurid promise that someone, somewhere passed out or vomited while viewing, therein lies the spirit of Le Théâtre du Grand-Guignol: the blood, the insanity, the gore, the gimmick, and the legacy.

2 thoughts on “A History of the Grand Guignol”